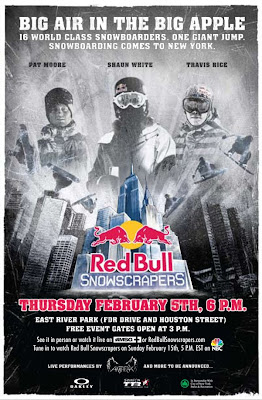 Finally A Snowboard Event in a city thats not a Pole Jam. The Red Bull Snow Scrapers features none other than the red headded death children of snowboarding, Pat Moore and Shaun White. And these guys are not afraid to hit some big shit. Pat Blasts 28foot quarter pipe airs and Slays pretty much anything. And Shaun White....well.. you know. He's pretty much the BEST. Word is that Red Bull will have some sort of huge hip or spine built for the event, I'm not sure if its a ramp drop in or slingshot. Anyway its a Damn Good reason to visit the Big Apple, And Cheer on Eastern Boarder Homeboy Pat Moore. I'm sure EB will have some other heavy hitters attending too.

The Red Bull Snowscrapers is going to be huge. Check out the coverage on stompandflow.com.