I swear Mike wrote this post at the same exact time Nashua was. Too weird. 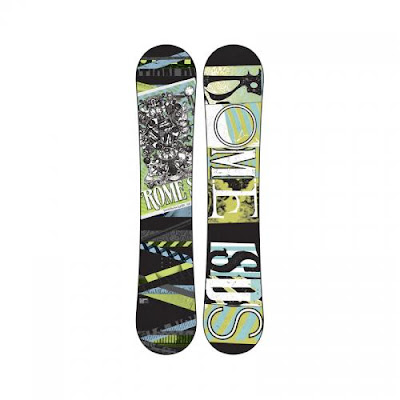 I've been a big fan of Rome Snowboards for awhile, I've rode a Rome for the past 3 out of 4 seasons and this year i'm making it 4 in a row. They're a good group of dudes, they're east coast based, and they know how to throw one hell of a party! Most importantly they make a damn fine snowboard! My board of choice is a 153 Graft, its basically a beefed up Artifact with reinforced biaxial fiberglass, impact plates underneath the inserts, a carbon V stringer going from underfoot to the contact points, and also has a sintered base. The board i'm reviewing today is the exact same thing just with reverse camber. Just like everyone else this year, Rome has their very own kind of reverse camber jargon, 1985 Free is the classification they give. What that actually means is that in between your bindings there are 3 mm of reverse camber, the nose and tail are straight with no camber, leaving you with 7 mm of reverse camber at the contact points. This allows for a very well rounded board, it performs just as well on rails as it does in pow. The mellow reverse camber gives it a soft playful feel in the park and a light floaty feel in powder, all around fun feel everywhere else. I got the chance to test out the Postermania last winter at a few demo days. The first thing I noticed is that it rides very similar to the Graft, but a little softer which is to be expected with any reverse camber board. On rails and boxes it's great, no problem pressing everything out. It ollies a bit weird at first (like all RC boards), but you get used to it. On jumps it's stable and smooth, not sure how comfortable i'd feel about taking it off a 50' booter, but the 25-40 footers are fine. It holds up pretty well at speed, with minimal chatter if you really start to push it. Overall I really liked this board, not quite as much as the regular cambered Graft, but thats merely a personal preference. If you want a well rounded rail board that you can still slay a foot and a half of Vermont's finest on, then you should definitly check out the Rome Postermania 1985. $449.99 in sizes 147, 150, 153, 156