Greg Lutzka found a new home over at K-Swiss according to Bryce Kanights and the dudes over at SkateDaily. Lutzka is now teammates with Anna Kournikova. I wonder if he is going to choose this one? 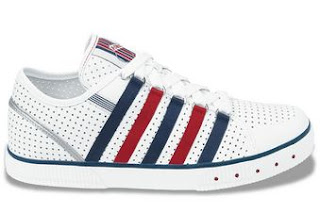 Think he'll be in the commercials? I first read about this about...a week and a half a-go from this skateblog that I check out everyday called YouWillSoon.Be careful, you'll get addicted.

I wonder who will fill the roster over at Globe. They really do have a good team down in Australia.

Spitfire wheels has released their catalog over at the DLX site. All black F1 series form Chris Cole (new team addition) sounds really sick. Word around town is that Jason Adams is also riding for Thunder Trucks now...lets see what the Thunder catalog looks like...

Anyone else see Weiger's Bangin' over at the TheBerrics? Watch that third trick...holy shit. "Hardway front 270 back lip to fakie"