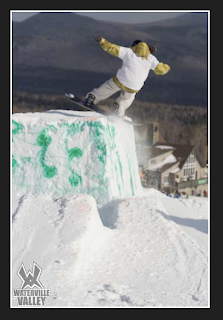 It was a breezy Saturday morning in the Valley as the custom TransAM slopestyle course got the final touches from the WV terrain park crew and opened for the traffic jam session at 11am sharp. Instantly the level of riding was through the roof. All 116 kids that entered were straight killing it! The set up consisted of two lines of three to choose from. The first line was the Zumiez couch hip, Waterville butter pad to down box and the Dakine mini hubba stair set featuring a single barrel down rail and a down bar. Line two consisted of the Ride Slime Wall, the Oakley up box with custom shark pool and last but certainly not least was the High Cascade jump with the loveable marshmallow jib barrel perched a top.

The traffic jam went on for about an hour and a half. The judges kept a watchful eye for standout riders as they ripped the course to pieces. Only forty recieved the coveted TransAM t-shirts and moved onto the finals.

The finals a.k.a The Ultimate Jam gave riders 10 minuites to show their skills on each feature. The Zumiez couch hip was up first and the couch was nose and tail pressed multiple times. The WV butter pad to down box was next featuring some of the best switch trickery Waterville has seen this season. The Dakine mini hubba set gave riders two rails to choose from, which both were annihilated in fine fashion. The Ride Slime wall took a beating from the finalists and showcased their overall riding skills with the amount of options available. The Oakley upbox saw 270's on and 360's off over the shark infested pool. The highlight of the finals was definitely the HCSC jump with the marshmallow barrel on top. There was 7's spun, cork 3's, rodeo's and a plethora of stylish grabs. Overall the TransAM course saw some amazing spinning, flipping and spinning flipping action over the course of the day.

Check out the TransAM VIDEO and picture gallery.

The awards ceremony followed with pizza pies, M&M cookies, Red Bull and some H2O. Custom Dakine TransAM board packs were awarded full of goodness from Oakley, Zumiez, Ride and HCSC and Transworld Snowboarding. High Cascade's own Adam Kisiel entertained the crowd. In the end there could only be a top three for both the men and women. Best trick was awarded to Ben Ross for a 1-footed indy huck over the HCSC marshmallow.
The winners are and will forever be known as: