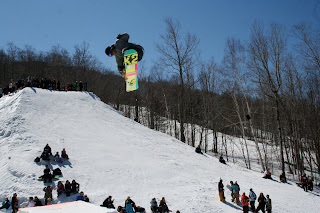 There's carnage early this year in the snowbro world. I spoke with Ted "crash" Lavoie today after his Dr. visit for an update on his condition. Seems like things could be worse, but he still managed to crack half of his kneecap vertically and did some other weird tweak at the same time while filming some street in Worcester, leaving him walking but in a brace. According to Ted he should be back on the snow if all goes well late in our New England season, and then heading to Hood for the summer to get back up to speed.

Best wishes from the EB crew. Here's Ted shooting out of the "Aggro Crag" from Last Call, and a dork around jib session at WV.