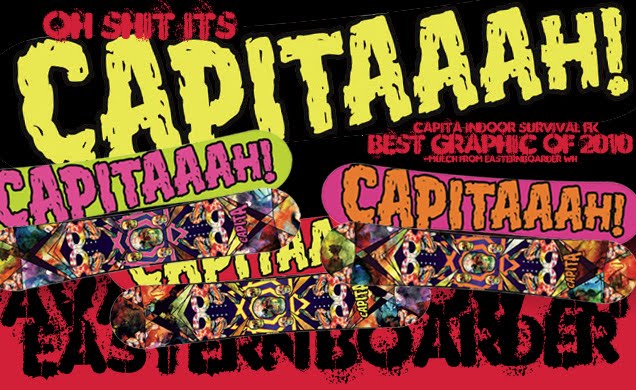 The new Capita Indoor Survival FK just came in today and I'm personally claiming this as the best Graphic of 2010... yup, top & bottom. I'm pumped on Capita. They make a really fun snowboard, and make it right, Capita uses Flat Kick Reverse Camber, that's where the FK tagged on the end comes from. FK is flat between the bindings and rockered from the bindings to the contact points. And the best thing is the Capita Indoor Survival FK comes in under $400, sure just a penny under, but what other board kicks this much ass for under $400.

Oh wait this one does.... the Capita Stairmaster is EB's Best selling Capita since they started making the Stairmaster. Fresh with top graphic inspired by the boys from Liverpool. Surefire winner. I rode the Stairmaster a bit last winter, and it held up pretty much everywhere, it really shines in the park and bombing around Loons Moto Trails.