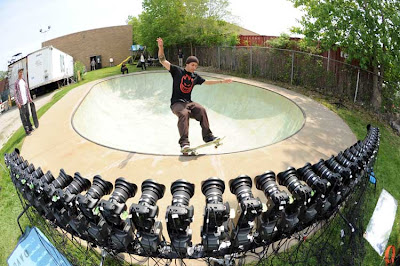 So everyone knows the Zoo York video came out and that the dudes from Mass, Westgate and Zered, fucking slayed. Westgate just turned pro, and from what I heard, deservingly so, as he has first part in the video...and one of the best skateboarders around, Zered Basset got ender. Boston's own Eli Reed won the Manny Mania contest and got $10,000 richer, and out out a killer video part all in the same weekend.

Holy Smokes. Thats a Bunch of angles. Or a crazy ass sequence shot. Steve Nesser, FS Grind.
In other video news, Steve Nesser's skateshop, Familia, out in the midwest released a video recently. You can check out the entire video by clicking HERE. It's good to see footage of Emeric Pratt again. Seth McCallum skates to a Suicidal song. hell yeah. Nesser's Fakie Flip on the Playground Spot is insane. David Jaimes has style for miles.