I found this post from the dudes over at Skate and Annoy. If you're in the Olympics, this is all yours, designed by Longtime EB team rider and homeboy Charlie Wilkins. 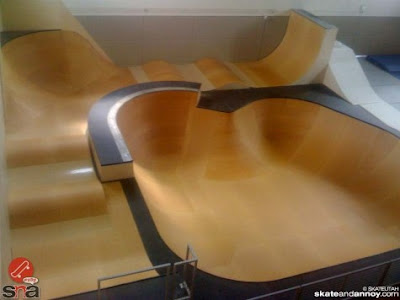 Sure, it looks fake, but that’s because it’s brand new and there is no frame of reference. The United States Ski and Snowboard Association has a training facility for Olympic athletes called, wait for it… The Center for Excellence. On the outside it looks like an outlet mall, but on the inside it’s got cross training equipment for snowboarders and skiers, including the bowl you see above, sent in by the folks at Skate Utah.

"From what I hear Charlie Wilkens (EB Team Rider) designed and built the bowl with some input from asst. pipe coach Rick Bower. If you haven’t seen Bower skate during camps up in Hood, not only can he kill it in the snowtube, he can put a hurt on the cement. Super nice guy too. Back section is for boardercross crew to work on pumping rollers and carving corners; unfortunatley for the skicross guys, they’ll have to strap on the blades for same effect. This is one case where the Olympics and skating can work together."