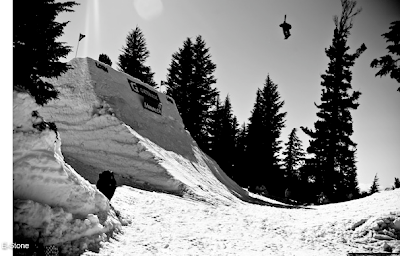 from Snowboarder.com "Riders were treated to a variety of options built by Mammoth, Bear and Loon Mountain park staff, but it was Loon builders Brian Norton, Tom Peplinski, Noah Wildermann and Jay Scambio who created a jump that made most other park features in North America look like molehills."

"East coast local and Loon lapper Brandon Reis commented that peering down the runway was like staring off the edge of the empire state building, which I translated into the word gigantic. After whispers wandered throughout the park, riders sacked up hard and began to sesh the beast."

Check out the VIDEO HERE, it auto plays or as EK would say it would be embedded in that ass.