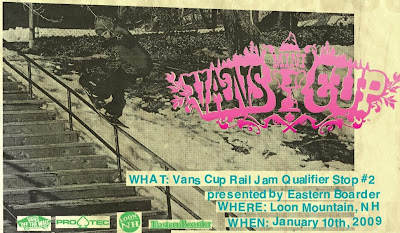 Join Vans and Eastern Boarder Saturday, January 10, 2009 at Loon Mountain in New Hampshire for the second stop of the Vans Mini Cup, a new series of three rail jams going down around the country this winter. The event kicks off at 11:00 am and will feature an open jam session, narrowing down to a 10-man final judged by Vans Snow team riders Darrell Mathes and Scotty Arnold along with team manager Doran Laybourn. The winner will score an all-expense-paid trip to the Vans Cup at Mammoth and a slot in the event’s invite-only rail jam. Cash prizes of $500, $300 and $150 will also be handed out to 1st, 2nd and 3rd place in both the men's and women's 16 and over divisions.
The Mini Cup stop at Loon Mountain will also serve as a qualifier into the 2009 Great Northwest Gromfest being held July 12 to 16 at Whistler, B.C. Riders under the age of 16 will have a chance to compete for two qualifying slots into the event as well as Vans snow gear, shoes and other cool prize packs!


Riders that would like to participate in the Mini Cup can register at Loon Mountain the morning of the event from 8:00 am to 10:00 am. Visit www.vanssnow.com/minicup for additional contest and registration information.


Riders staying in town for the event can receive a 20% discount on lodging at Woodward’s Resort, located near Loon Mountain. Call 603.745.8141 and mention Vans Mini Cup.
The Mini Cup stop at Loon Mountain, presented by Eastern Boarder follows a rail jam presented by Satellite Boardshop earlier this month at Winter Park Resort in Colorado. The final Mini Cup stop will be presented by Leroys Boardshop and One Way Boardshop on February 7 at California's Bear Mountain. (Please note that the date has moved up one week).
A special thanks to Satellite Boardshop, Eastern Boarder, Leroys Boardshop and One Way Boardshop for their support!

About the Vans Cup: Widely regarded as the West Coast’s most important professional snowboarding competition, The 5th Annual Vans Cup will be held at Mammoth Mountain February 27 through March 1, with nearly $200,000 up for grabs. The weekend kicks off with an invitational rail jam Friday night, where top riders throw down their best tricks for a chance at the coveted Vans Cup and a huge cash prize. The action continues Saturday with a Slopestyle comp and the Vans Cup caps off Sunday with the Superpipe finals.