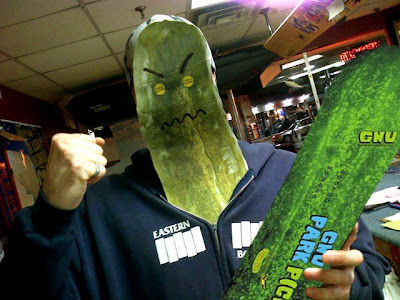 Mr. Pickle is angry again... now he feels he's being exploited in the name of cool snowboard technology. The new Gnu Park Pickle was unveiled at the North American sales meeting for Gnu Snowboards. The Patent Pending Proprietary Park Pickle Product will be included in the 09/10 Gnu Snowboard line. Based on the idea that heelside turns require more leverage than toeside turns, the Park Pick will have a deeper sidecut on the heelside. The board is a true twin shape with a centered stance so it can be ridden with either goofy or regular and includes Mervin Mfg’s exclusive use of Banana Technology.

A limited run of 300 Park Pickles for North America will be built and released for sale to select Authorized Gnu Dealers in mid December. You can get your hands on one at the EasternBoarder online store....HURRY, because there are only a few available. Pre-order now, shipping before Christmas.